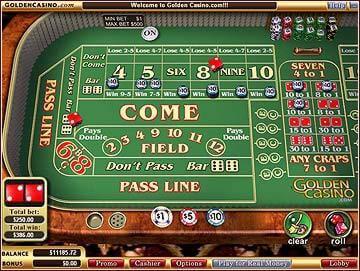 When you enter a casino, the most striking thing you may see is a group of people huddled around a table shouting, cheering, and having a good time playing. While casino ethics usually require players to maintain proper decorum, keep yourself mum while playing, and never let any emotion out; most of these unwritten rules are not implemented at this table. This is the game of Craps.

Where to Play Craps

Craps is a social casino game and is best played with friends. It is also a great way to meet new people. But if you’re the type who cannot tolerate much shouting, cheering, and laughing or you are new to the game; then online craps is best for you. Many online gaming sites like LibertySlotsCasino,com offer Craps for players who prefer playing in the comfort of their own home. LibertySlots Casino offers players a chance to appreciate the game better, thanks to its on-site help so beginners can play like a pro in no time. Download software and play for free or for real money, Liberty Slots Casino will let you play Craps as you have never played them before.

How to Play Craps

Like many casino games, Craps begins with players wagering on the table. Bets are made against the house. The bets are made on the shooter, that is, he can roll the dice to win. Instead of betting against the player, you are actually betting on his luck in throwing the dice. All the shouting, friendly gestures, and other friendly overtones comes from the fact that other players win if the shooter wins.

After the bets have been made, a player (normally referred to as a shooter) will throw his first dice called the ‘come out roll.’ His aim is to throw a dice sum of 7 or 11. If he does so, he gains a ‘natural’ and he automatically wins. If he throws a 2, 3 or 12, he gains a ‘craps,’ and he loses. If he throws other sums, it is called a ‘point,’ and he has to throw the dice again. If a number other than the point or a seven is rolled, the player rolls again. If the player rolls the point, all bets win and the series ends. If the seven is rolled, the player ‘sevens out,’ loses, and the series ends. When the series ends, another shooter is called to throw the dice.