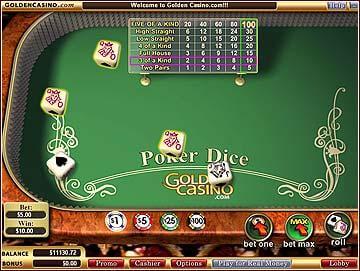 People have always loved playing with dice. This is probably why various games using dice have been developed, and with the popularity of online gambling and casinos, it is inevitable that poker dice would be developed.

Poker dice is the dice form of poker. There is a special set of cards for this game. The set is composed of a 9, 10, Jack, Queen, King and Ace. Of course, you can always play with regular dice.

Poker hands are formed from the thrown dice cards. However, there are a limited number of suits that can be formed from these cards. Hands are limited to Lows and Highs like Two Pair or Pair, Three of a kind, Four of a kind, and Five of a kind; Ace High, Straight, and Full House.

This game is moderately easy to play. If you have your poker dice, you can use the same. However, if you use the regular dice, the substitution follows:

The players would each roll the dice to see who will go first. The player who gets the highest roll, of course, will go first. A tie results in another round of rolling. If you are the highest roller, you’ll go first. You will have to roll all five die. After your first throw, you will then choose which of the dice you would wish to keep, and you will then roll the remaining dice. You can roll the dice three times per turn, or you can opt to stop rolling after your first throw or second throw.

After everyone has taken their turns at rolling and throwing the dice, the hands are then ranked according to the highest roll to the lowest roll: