Take a Trip to the Wild West in Stagecoach Slots 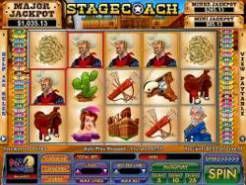 Play Now
Traveling by stagecoach in the Old West was dirty, uncomfortable, and dangerous; not only were there bandits, but there were also Indians who would try to rob stagecoaches as they traveled west. Those days may be long forgotten, but Stagecoach Slots is a great way to revisit this time period that shaped America.

Western-Themed Action on the Reels

Stagecoach is a 5-reel, 50-payline game that features a scatter, which may award free credits or launch the “Pick Me” bonus game that gives free spins to the player. Stagecoach also offers random progressive jackpots that could be awarded at the end of any game. The icons on the reels in Stagecoach Slots fit the theme of the game perfectly, and include a Cowboy, Fort, Saddle, Cactus, and several other Wild West images. The wild symbol in the game is depicted by the Indian Chief and can act as a substitute symbol for most other icons in the game; only appearing on reels two, three, and four, this symbol will double the prize anytime that it completes a winning combination on the screen.

Score Credits and Free Spins with the Teepees

The Teepee scatter symbol in Stagecoach Slots has the ability to trigger both bonus games. When at least three Teepees land on the reels, players are awarded with a payout that’s determined by the number of scatters on the screen; this prize can range from 3X to 200X the original bet. The second bonus feature launches when players score a Teepee on the first and fifth reels; they’ll then have the chance to select from five Teepees, which offer varying outcomes: A bonus multiplier will be added to the free spins, and its value is based on the number of rounds completed. Players may win up to four free bonus rounds, and these can be retriggered if the scatter symbol lands on the first or fifth reel during the free games; when this occurs, an additional five free spins will be added to the original number of bonus spins.

While the days of the Old West are a distant memory, the hardy spirit of those American pioneers lives on in the information age through entertaining western-themed slots. Stagecoach Slots is a great way to reclaim the feel of the Old West, and gamers will love having the chance to score incredible prizes while they do. Get your fix of historical entertainment today by spinning the reels in this thrilling game.
Play Now

Where to Play Stagecoach Slots