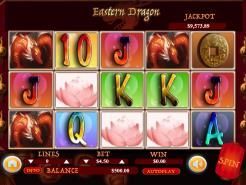 Play Now
With an almost alarming chime that captures the music of the Far East, Eastern Dragon Slots by Arrow’s Edge will make you forget that you’re in the privacy of your own home - and not in the deepest recesses of some ancient Chinese temple of worship. This 5 reel, 20 payline Slot from Arrow’s Edge provides adequate graphics and a better-than-average gaming experience with the dozens of possible winning combinations. the background music goes from loud to soothing after just a few rounds of spinning symbols, so just sit back and relax as the chips start to pile up.

As you would expect, the symbols on the reels are highly-representative of elements of the Orient. There are ancient Dragons, Coinage from that distant period of time, Purple Orchids, Fish, Firecrackers and the higher card jackets. The Scatter symbol is the golden Coinage; it is truly a marvel of riches. Get at least three of them and you may be rewarded with anywhere from 5 to 200 times your original wager. If you land the Wild symbol ancient Dragon on the right reels, then you’re whisked away to the Bonus Game where dozens of possible Free Spins await - with no upper limit if your luck holds out. Before you get here, though, spend some time with the Dragon in the regular game - he doubles all your wins when a winning combination shows up. Free Spins can be re-triggered, so you get to watch your balance increase even as the Bonus Rounds crop up. The best part of all is that you don’t need deep, unending pockets to experience the Orient through this Slot - the betting starts off manageably. Arrow’s Edge continues to outdo itself with online casino games like Eastern Dragon Slots, and you the gamer benefits the most.
Play Now